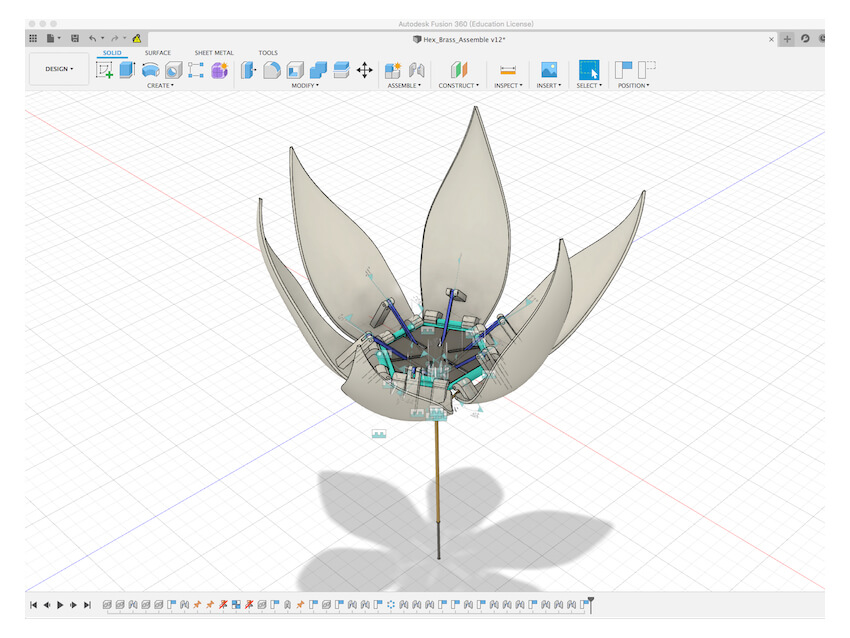 Assignments: Propose a final project masterpiece that integrates the range of units covered. Your project should incorporate: 1. 2D and 3D design 2. Additive and subtractive fabrication processes 3. Electronics design and production 4. Microcontroller interfacing and programming 5. System integration and packaging Where possible, you should make rather than buy the parts of your project. Projects can be separate or joint, but need to show individual mastery of the skills, and be independently operable.

In this proposal, presents one work, “Breath of Flora” —— an interactive sound and light mechanical flower. Infrared sensors and sound detection sensors are used in the artwork as the main technique to interact with people. The work adopts “Listening” as the concept and is going to be displayed in the oldest and longest functioning mental hospital in Finland —— Lapinlahti Hospital around summer in 2020.

What will it do?

The artwork will be installed on the corridor wall in the hospital as a decoration to intrigue passersby to stop and interact with it. Motors, gears, metal sheets, and microcontrollers are implemented to build the work into a mechanism in a shape of a flower for the purpose of echoing to one of the most essential medical treatments to patients —— the outside large blooming garden. Since natural surrounding plays an advantageous role in the cure of patients, it was taken into account while constructing the hospital, which was in fact unconventional in those days.

In the dim quiet passage full of kinetic flowers, these blossoms act as if they were transformed from consciousness of the past sufferers living with perception, leading audiences to listen and feel the patients' apprehension and belongingness deep inside their hearts. By detecting the distance between pedestrians and the installation with an infrared sensor, the inner microcontroller sends a signal to trigger the flower to blossom and light up LEDs hiding inside petals at the breathing rate. On the other hand, the script of a soliloquizing speaker placed inside the ovary of the flower installation correlates with the volume of the sound in the space which is observed by a sound detection sensor.

Who has done what beforehand?

I found a final project about the mechanical blooming flower from the 2016 fab academy archive. The author used a servo as its output device, 3D printed components and poplar wood to construct the hardware parts. For the interaction, he adopted a photoresistor as its sensor which requires close/touchable detection.

What will you design?

The proposal mainly focuses on how to augment new media art to intervene in our daily life with the approach of enhancing the interaction between viewers and artworks. Most art pieces in domestic hospitals such as paintings, sculptures and calligraphy are all in the static state and passively waiting for people to appreciate and discover their notions. “Breath of Flora” —— an interactive sound and light mechanical flower contributes a whole new experience of art appreciation in the following aspects:

What materials and components will be used?

Where will they come from?

Most of the materials used for my final project will be bought from DigiKey. Others will be found from hardware stores, online shops or Aalto Fablab.

How much will they cost?

What parts and systems will be made?

The “Breath of Flora” —— interactive sound and light mechanical flowers will be divided into these parts during its development:

What processes will be used?

After finishing making the systems above, there are some other processes left:

What questions need to be answered?

So far there are some questions I might need to think about at the moment:

How will it be evaluated?

For my own evaluation, the first flower prototype should follow its program to interact with audiences in real-time without any delay or shutdown. It is also important to me to get the feedback about whether or not the interaction is intuitive without any guidance from the people who play with it.

© Copyright 2020 | Created by Wan-Ting Hsieh | All Rights Reserved
This work is licensed under a Creative Commons Attribution-NonCommercial-ShareAlike 4.0 International License.